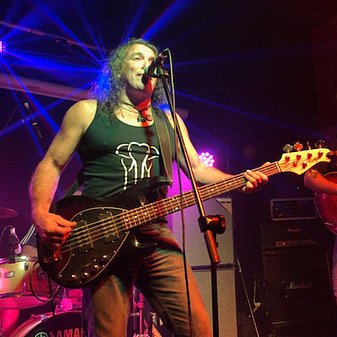 Nick How (born November 23, 1965) is an Australian musician, singer and songwriter. He played bass and sang lead vocals in rock band Motorvators from 1983 til 1998 and founded the band GinJan in 2002, for whom he is the singer, bass player and principal songwriter. Nick also plays acoustic solo shows and fills in occasionally with other bands from Victoria’s south west where he resides.

Nick performing with Motorvators in 2018

Nick started his career singing the occasional song with high school band Deuce at the age of 16 in 1981. Key members of Deuce, David Favelle, guitar and Ronald Philp, drums, along with their fill in music teacher John Maroniti, guitar then formed Motorvators with Nick How on bass guitar in 1983. All members of the band shared the job of lead vocals. Favelle departed the band in 1984 to be replaced by Wes Hayhoe who stayed til 1986 when he was replaced by Russell Moody and it was this line up that went on to play over 1300 shows in Australias south east. Nick departed in 1998 and took up playing the occasional solo show on vocals and acoustic guitar. He also did 2 years as music instructor at Casterton Secondary School while building up his solo acoustic shows. In 2002 he began writing songs for GinJan’s debut CD, Off With My Head and was joined by long term friend and guitar player Darren Ely. In 2003 they recorded the album at Warrnambool’s Lassiter’s Reef Studios with long term Motorvators producer Tony Peel and ex Motorvators drummer Jon Emry.

GinJan then began touring around Australia’s south east region with Live drummer Jeremy “Gilly” Gilmour. After Gilly’s departure GinJan used various local session drummers until the role was eventually filled by Richard “Dicko” Turner. GinJan are still performing today notwithstanding being locked out of the live scene for 16 months due to the Covid Pandemic.

Nick is currently writing tunes for a new solo EP "Randomiser" and the first single "Keep Me Waiting" will be released in a few weeks. A new GinJan album, "Lost at the Party" will be ready for release around April 2022.